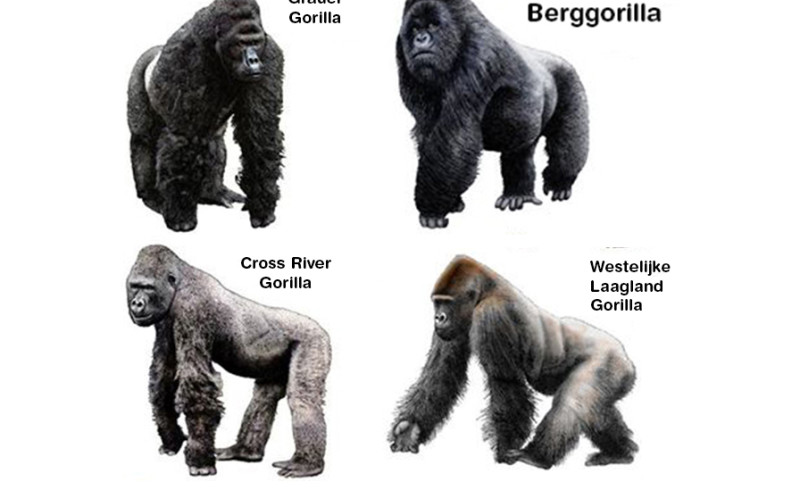 Gorillas are iconic animals which capture our imagination. Their image was – especially in the past – not always positive. Movies like ‘King Kong’ for example portrayed gorillas as big and scary creatures. Luckily we now know more about these animals. The image has changed from scary to a friendly giant. Today this species has a large group of enthusiastic followers. Some of these followers are very much involved with gorillas. They sometimes even know exactly the background of each gorilla in zoos, including their names and to whom they are related. The information on our site will not be that detailed. Even more so because we focus on gorillas in the wild and the species in general.

Gorillas are divided in two species, the western gorilla and the eastern gorilla. These species are subsequently divided in four subspecies. The difference between ‘species’ and ‘subspecies’ is explained here.

The western lowland gorilla is smaller in size than the mountain gorilla. Their fur is shorter and less dense. Most of them have brown hair on the top of their heads. They live in Gabon and Congo- Brazzaville. Of all gorilla subspecies this species has the most individuals left in the wild. The estimated number is 361.900. They live in small family groups and preferably on the ground. Although females sometimes make nests in trees, the silverback is too heavy to do so. He sleeps with part of the group in a nest of leaves and branches on the ground. Young gorillas share a nest with their mother.

This subspecies eats 44-66 pounds plant-based foods per day. Their diet consists of fruits, leafs, seeds, bark and stems. Western lowlands gorillas are known to eat termites regularly. To reach the termites, they don’t use a stick – like chimpanzees do – but they just break the termite hill open. When there are fruits, they prefer this. But fruits aren’t always available so it isn’t always the main part of their diet. These gorillas don’t travel far each day. They’re active in the morning and eat whatever is around them. After a while they move to the next patch with food. In the afternoon the adults rest and the children play with each other.

The Cross River gorilla is named after the area they live in. This subspecies lives at Cross River, on de border of Cameroon and Niger, at 300 kilometers distance of the other western gorilla.
They are the most western and northern form of gorilla. Of all gorillas they are the most endangered. It is assumed that there are only about 250-300 individuals left, spread over 9 isolated areas. Due to human activity their habitat is strongly disrupted. This means that individuals can’t reach each other anymore. This is diminishing their chance for survival.

There has been research on multiple groups at different locations. The data suggest a lot of similarities between groups, but also location specific behavior. In general it can be said that the groups are small compared to other gorilla subspecies. This group usually has 4-7 individuals. One silverback and his wives with their young. These gorillas also make nests but depending of the season they do this in the trees or on the ground. In the rainy season they choose their nesting sites more often in trees. They often make several nests in one day, and sometimes they re-use these nests.

The diet of the Cross River gorilla depends of the season as well. They prefer fruits and also eat leafs, herbs and tree bark. In dry periods when there aren’t many fruits to be found, they are content with the other foods in their diet.

The mountain gorilla is the second largest gorilla subspecies. The 1063 individuals live in the mountains of Uganda, Rwanda and the Democratic Republic of Congo. They have thick and long fur. A group can be as big as 30 individuals. Usually there is one silverback with this subspecies, but groups with multiple males have also been observed. These men are almost always, father and son, or brothers. They’ll lead the group together. Because the group is better protected this way, it becomes possible to increase the group size.

When the young leave their birth group, young females will join neighboring groups. Young males can live on their own until they have found some females to start a group with, or they join a bachelor group. Together with other sub adult males they will wander round. In this they differ from the western gorillas as the latter never form such groups.

Mountain gorillas have the most fiber rich diet. Although they are vegetarians it is been calculated that, on average, they take in 1000 insects together with their vegetables per day. This is presumed not on purpose. Of all gorillas this subspecies is researched best. Most famous is the work of Dian Fossey, the main character in the movie ‘Gorillas in the mist’. Most people think of this movie and mountain gorillas when they hear ‘gorilla’. Ironically, most people will never see a mountain gorilla in real live, due to the fact that there aren’t any in European zoos. The main gorilla species in practically in all zoos is the western lowland gorilla.

The Grauer’s gorilla is the largest of the four subspecies. They have many similarities with mountain gorillas. Grauer’s gorillas however are physically bigger and heavier. Their fur is shorter and less dense. The group usually consists of one silverback and his wives with their young. But just like in mountain gorilla groups, multiple males do occur. Also bachelor groups are observed.

Of all gorilla subspecies the Grauer’s gorillas have the largest dispersion range when we look at the altitudes where they live. Therefore the name ‘eastern lowland gorilla’ isn’t very appropriate, as these animals hardly live in lowlands.

According to recently published research the number of Grauer’s gorillas has declined drastically. They suffer from the instability in the region in which they live. Besides that they often fall prey to hunters for bushmeat. Right now their number is estimated at 3800 individuals and they are listed as ‘critically endangered’.