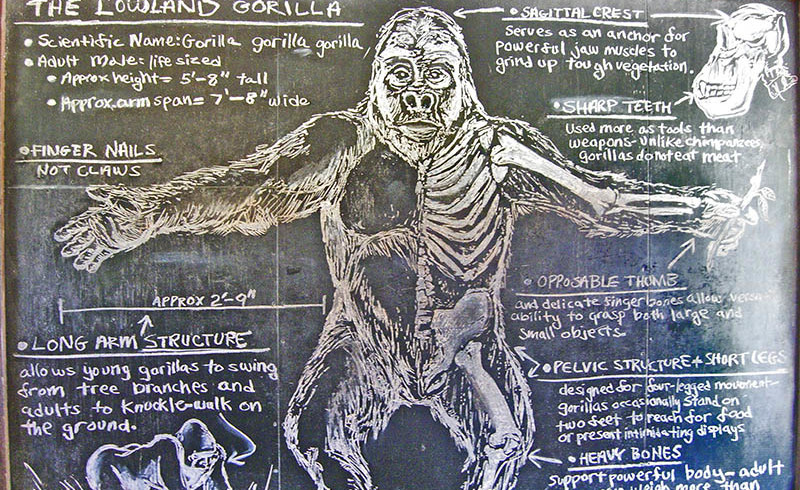 When you do a Google search on gorillas, you are likely to find all kinds of different data. Figures such as lengths and weights will differ. And even though the figures will not differ much, you will not find one standard throughout the net. This is not surprising, because obviously there is no such thing as “the gorilla”. There are two species and they differ in appearances and habits. It would be like trying to catch a human being with all its physical forms into one standard. Just try to determine the exact age of when a human hits maturity!

In the summary below we use averages for the genus “Gorilla”. In the description of the different species we will be more specific.

Gorillas have a black/brown coat that covers their entire body, except their faces and the palms of their hands and their feet. Their skin is black. When they are young their chest is completely covered with hair. When they mature this hair usually partly disappears. Like humans there are differences in hair color and the amount of hair, for example, in the facial area or on the chest. The differences in hair color will be smaller than what we see in the human population. The hair usually is black, sometimes more brown and even grey as they age. A male gorilla with grey hair doesn’t necessarily mean that he is old. All adult males will develop gray, silvery hair on their back around the age of 15, hence the name silverbacks.

The hair difference between gorilla species is a useful identification tool. In eastern gorillas it is long and woolly. In western gorillas is of medium length and smooth.

The gorilla is the largest of the great apes or hominids. Humans are part of the hominid family as well. Therefore it isn’t surprising that there are many similarities between gorillas and humans. Humans and great apes have a common ancestor. So it is not true that man is descended from apes. Like all humanoids, gorillas have no tail. But unlike humans, gorillas don’t walk upright but move on their knuckles and feet. They may walk upright for a short period, but because the different position of the pelvis this is not their normal body posture.

Gorillas live primarily on the ground. But gorillas do like to climb in order to play or to eat fruit. Adult mountain gorillas from the Virunga National Park very rarely climb into trees. But then again, there are few suitable trees for nest building in their habitat, and there are hardly any fruiting trees. Western lowland gorillas, on the other hand, spend considerable time in trees even as adults. Silverback males stay on the ground most of the time because of their great weight. But even they will climb high into fruiting trees if the branches can carry their weight.

All gorillas are primarily vegetarian. The majority of their diet is composed of stems, leaves, grasses, herbs, roots and bark, supplemented with fruits when available. Gorillas do not hunt but do get their share of small animals, as they will eat insects together with the plants they live on. And did you know that western gorillas occasionally break up a termite mount to eat termites?

Gorilla food is very rich in fibers and these are difficult to digest. It takes a long time before the nutrients are released by the digestive system. To get everything they need out of this fibrous food, gorillas have much longer intestines than we humans do. Food will stay longer in the intestines to ensure more complete digestion and release of nutrients. Gorillas have a large belly. Not only for the longer intestines, but also for the gasses that are released during the digestion of large amounts of fibrous vegetation they eat.

Anyone observing gorillas in a zoo must have seen them eating their own feces (poop), as well as the feces of other gorillas. We humans find this habit repulsive but actually it is a very useful natural behavior. This behavior has also been observed in the wild. Gorillas do this because some of the nutrients from their food are not released on time in their digestive system. By eating their poop valuable minerals and vitamins (especially B12 which they need for their joints) are made available. So, it’s not a pretty sight, but it is a very useful behavior!

The muscles of a gorilla are bigger and stronger than that of humans. Due to the longer intestines they have a more convex belly than humans. Their pelvis is wider and tilted in comparison to that of humans. This makes the gorilla adapted to life on the ground. They walk on their feet and knuckles of their fingers. Hence, their arms are longer and their legs shorter.

Gorillas have a wider chest and large hands and feet. They both have an opposable thumb as well an opposable big toe. Because of this, they can grasp things with their feet. Also notable is that their skull is shaped differently than a human skull. It is much less smooth and has a less pronounced curvature than a human skull. The brain of a gorilla is smaller than that of a human being, as is the braincase in the skull. This creates a smaller bulging of the skull. But when you look at a gorilla it’s hard to observe this with the naked eye. This is because the insertion of the tendons of the muscles in the neck and shoulders extends over the skull. These tendons have to be able to attach themselves to something. This immediately explains why a gorilla skull is less smooth and why there are all kinds of protrusions. Here is where the tendons are well secured on the skull.

The main reason for the differences between the skeleton and the shape of a gorilla and a human being is because of the difference in power. Where man must rely on his brains to survive, the gorilla, apart from its intellect, will use its strength.