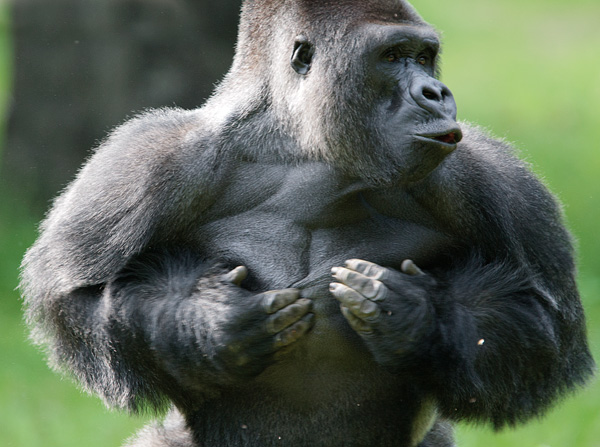 Gorillas are social animals that live in groups. A gorilla group usually has a harem structure of one adult male, or silverback, living together with several adult females (three to six) and their offspring. The task of the silverback is to lead and protect the group. If his leadership is successful, the females will stay in the group. If not, the females will switch to another silverback which better suits their needs. So, a silverback not only has to be very strong and intelligent to lead the group. He also must have a high degree of social intelligence to keep the group together.

There are differences in social structure between gorilla species. In contrast to the western gorillas, the eastern gorilla groups may contain several adult males who are closely related. Although the size of gorilla groups is very variable, usually containing four to ten members, groups with more adult males are better protected and tend to be larger, up to 30 individuals.

In multi-male groups one of the young males stays with the group. This way he has a chance to take over the group from his father in the future. Another possibility for a young male is to leave the group at sexual maturity. He will roam the forests on his own, until he succeeds in starting his own harem. But first he has to impress his future females and seduce them to join him. These future females can be part of an existing harem or they have reached sexual maturity leaving a group to join a new one. The young male will try to impress them with chest drumming, slapping the ground, running around and ripping off branches. By showing his strength he will show them that it might be interesting to join his harem. Although usually it stays with impressing behavior, it is not always without danger. There can be fierce battles between silverbacks, resulting in severe injuries.

Mountain gorilla males often form an all-male bachelor group. This may offer advantages in terms of safety, but eventually they will try to form their own harem.

Despite the leadership role of the silverback, females have a free choice to stay or transfer to another group. In general, females emigrate from their natal groups to avoid inbreeding. They do not always stay in their new groups throughout their lives and secondary transfer to another group or single male is common, also for the older females. This could be the result of dissatisfaction with the silverback of their group or because they are low in the hierarchy. By joining a single male, they can improve their status significantly.

The female hierarchy is not easy to understand, because of the frequent changes. The distance to and the attention of the silverback are indicators of their status. A fertile female usually is very popular and will remain close to the silverback. The female with the youngest offspring generally is the most important. The reason behind this is that this young is the most vulnerable in the group and needs protection from the silverback the most. A female who is no longer fertile, will receive considerable less attention. But did you know that gorillas also have a personal preference? Even when they are fertile, some females will not get much attention from the silverback.

Generally, female gorillas have limited friendly relationships with other non-related females in the group. In a sense they’re all competing for the attention of the silverback. Females groom themselves and their young, reinforcing their bond. Female-female grooming, as frequently observed with chimpanzees, is however seldom observed. When young sexually mature females stay in the group, as observed in larger groups of mountain gorillas, sub family groups of mother and daughters may originate. The social nexus is larger in these groups. The silverback often ignores his daughters and these will mate with another silverback, very often their uncle or half-brother.

Female gorillas reach sexual maturity around the age of eight. Once they have reached an age of approximately 10 years, they give birth to one baby every four years. In the course of her life a female will give birth to four to five young. The pregnancy lasts 8.5 months. During the first two years a young gorilla is entirely dependent on breast milk. The nursing frequency will decrease with the ability of the infant to take on solid food. After the infant is weaned and reasonably independent, the mother begins to ovulate and shortly thereafter becomes pregnant. The infant will stay close by and to some extent still depends on its mother until sexual maturity. Gorillas belong to the mammals with the longest childhood dependency.

Approximately equal numbers of male and female gorillas are born in both gorilla species. You would not expect this when looking at the group composition with more females than males. One explanation might be the higher risk for male gorillas. They have to protect the group and, if necessary, fight, with the possibility to die prematurely. A good, exact explanation has not been found yet. Usually a female gives birth to one gorilla young at a time. Twins are rare. And when they are born, they rarely survive both. An infant is totally dependent and will remain close to its mother during the first few years. But the infant has a lot to learn to be a gorilla! Gradually it must learn to climb and will be taught the social behavior within the group. They also learn while playing with the other (young) gorillas. You will see both young males and females practice chest drumming during play, copying the behavior of the older gorillas. The young males copy the behavior from the silverback and learn how to lead a group. Young females learn motherhood from watching the older females. The latter is very important because gorillas cannot care for an infant based on instinct alone. They really have to learn this from the experienced mothers in their group.

Playing is very important in the life of young gorillas and in their integration into the group. Silverbacks like to participate as well and are frequently sighted playing with their young. The entire group takes care of the baby gorilla and will protect him when necessary.