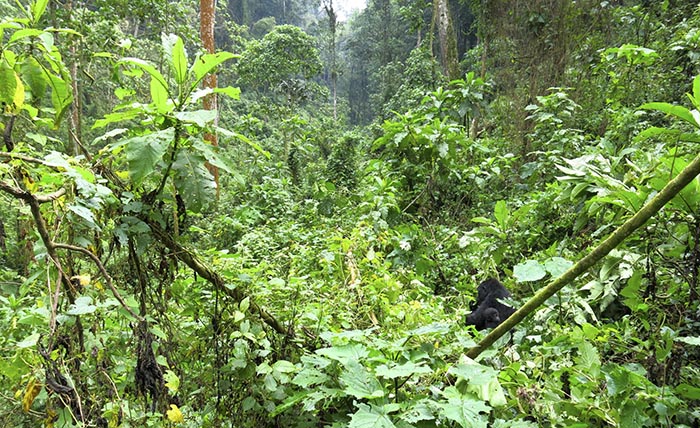 Gorillas live exclusively in the tropical rain forests of Africa. Their range is divided into two parts – almost 900 km separates the western and the eastern gorillas. The reason for this is probably that a formerly uniform area was split at some point, most likely during the ice ages. At that time, climatic changes caused the rain forest to shrink into a few refuge areas. The savannah, which spread between these refuge areas, was not an appropriate habitat for gorillas. Later, when the rain forest spread again over the whole of the African tropics, gorillas could only advance to the Ubangi and Congo Rivers. These rivers formed significant obstacles to the gorillas making the separation permanent.

As western and eastern gorillas have been separated for such a long time, they have followed separate development paths. Today, they differ distinctly both in their external characteristics and in their genetic material. 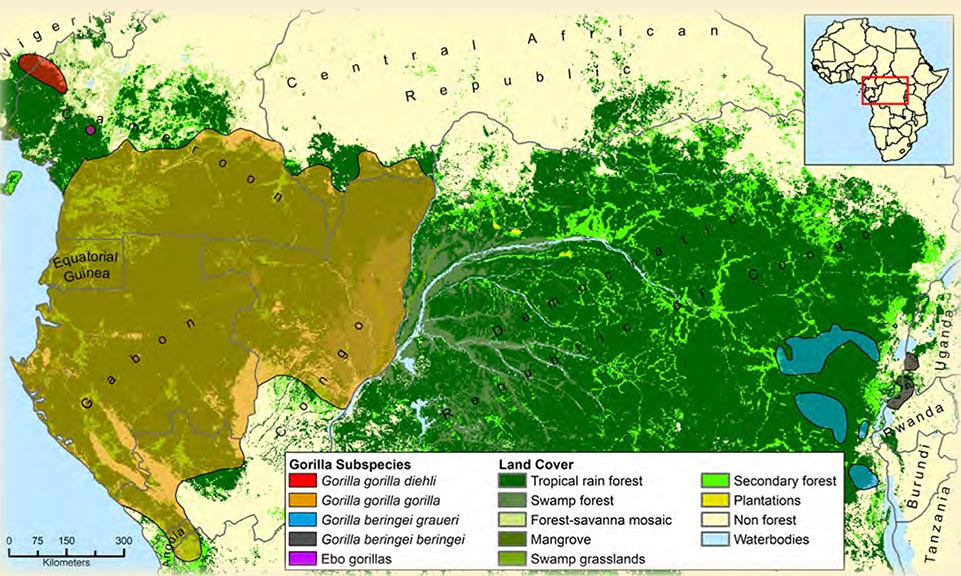 Because of the large size of the range and the distance between the two gorilla species it is easy to observe that the gorillas live in very different biotopes. Even within the habitat of a subspecies the natural variation is rather large, from swamp to mountain forests.

The mountain gorillas live on the border of the Democratic Republic of Congo with Uganda and Rwanda. They live in the cloud forests of the Albertine Rift and the Virunga volcanoes, at an altitude of 2200-4000 meters. Most mountain gorillas are found on the slopes of three dormant volcanoes, Karisimbi, Mikeno and Visoke. Occasionally mountain gorillas climb up above the tree line; their traces have been found at an altitude of 4000 meters. The vegetation is very dense but becomes thinner at higher altitudes. The title of Dian Fossey’s book Gorillas in the mist is chosen well. The forests are often shrouded in clouds and mist. At night the temperature can drop below freezing, but thanks to their long hair mountain gorillas remain warm. The habitat of the mountain gorillas has two rainy and two dry seasons per year, with an average rainfall of 2,000 mm per year. The rainy seasons are from March to May and from September to November. The dry season is from June to August and December to February.

The Grauer’s gorilla is also known as the eastern lowland gorilla, but the last name is not very well chosen. Grauer’s gorillas live at an altitude of 600-3308 meters in lowland tropical forests, transitional forests and the mountain forests in the east of the Democratic Republic of Congo. The best studied Grauer’s gorilla group lives in the highlands of Kahuzi-Biega. Here, their habitat varies from the dense primeval forests to moderately moist forest, to papyrus marshes and peat. The habitat of the Grauer’s gorilla also has two longer rainy seasons. The first is from March to June and the second from September to December. There are also two dry seasons, from June to September and from December to March.

Western lowland gorillas have the greatest range of all gorilla subspecies. They occur in Angola, Central African Republic, Republic of Congo, Democratic Republic of Congo, Equatorial Guinea, Gabon and Cameroon. They live in primary and secondary tropical lowland forests, swamps, river forests, but also in areas with mostly shrubs and abandoned farmland. A secondary forest is forest that has developed in places where the primary (original, pristine) forest is seriously disturbed. This can be caused by fire, insect pests or deforestation by man, or because it has disappeared by itself.

As the name implies, the western lowland gorillas live from sea level to 1600 meters. The average rainfall is about 1500 mm per year, with the greatest rainfall between the months of August and November. Since the discovery of a significant population of gorillas in 2006-2007 in the Republic of Congo, swamp forests are considered the most important habitat of the western lowland gorilla. These areas are also very reliable feeding areas for the gorillas, in both the wet and the dry time. The isolated location of the swamp forest is of great importance for the protection of the gorillas.