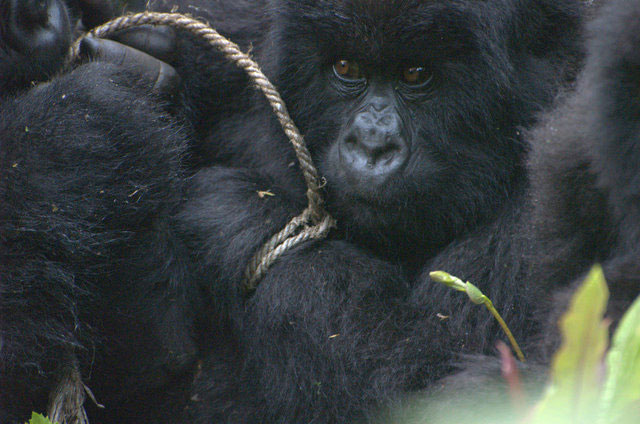 The gorilla is an endangered species, mainly because it has been a long-time victim of poaching. IUCN (International Union for Conservation of Nature) publishes an annual “Red List” of endangered species. According to this list the status of three of the four gorilla subspecies is critically endangered. This is the most critical status on the Red list. The final stage before this great ape will become extinct in the wild. According to the latest estimates, there are 367,000 gorillas left in the wild. By comparison, 100 years ago there were an estimated 700,000. The time to take action for the gorillas is now, before it is too late and these wonderful animals forever disappear from our earth.

What are the biggest threats to gorillas? The most important are hunting, habitat loss, disease transmission and war. 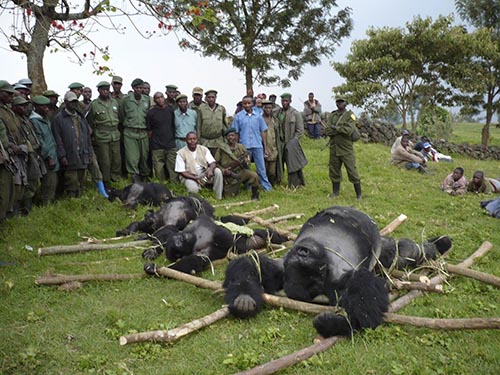 Poaching of gorillas has been seen as a major threat since the 1930’s. Local people like to eat gorilla meat. Poachers who are looking for bushmeat penetrate the rainforest easily, using the roads made by the logging companies. Gorillas are relatively easy to kill. In addition, sometimes the hunters give preference to this species over other animals, since they provide for a higher amount of meat in order to sell. The gorillas are often mutilated or slain by traps, which are intended for other animals.

Traditionally bushmeat was used by local villagers to feed their families. But because of globalization, the demand for bushmeat has increased enormously. Not only in the urban African population, but all over the world. The consequences for many critically endangered species, including gorillas and other great apes, are disastrous.

The bushmeat trade is largely illegal, but highly profitable for the locals. It is often the only source of income. A hunter annually can earn approximately $ 300- $ 1,000. That is considerably more than the average household income. The meat is sold as a luxury product in rural and urban markets and to the employees of logging companies.

Gorilla bushmeat is illegally exported to Europe, often ordered by expatriate Africans. Gorilla meat presents a small part of the trade in bushmeat, but the impact on gorilla population is large. Gorillas reproduce slowly. A group member is not replaced immediately. Each gorilla killed disturbs the age structure of the group. Poachers killing the mother gorilla also hurt the offspring because they are dependent on their mother’s milk. If a dominant male is slain this seriously disrupts the social structure, and puts the survival of the whole group at risk. 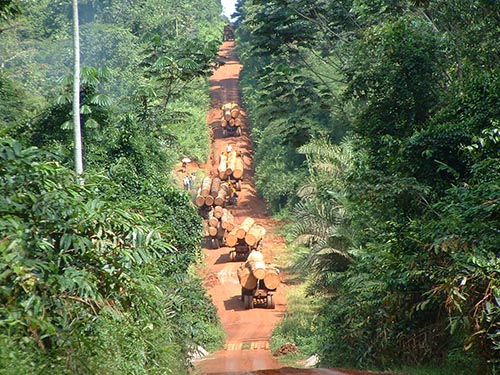 Africa currently has one of the highest human growth rates in the world. The African population doubles every 24 years. These people obviously need space for homes and livelihoods. The explosive demand for land and natural resources is the main reason for the loss of gorilla habitat.

Major threats to the survival of the gorillas are:

Deforestation had fragmented gorilla habitat. Or in the case of the palm oil plantations it has disappeared altogether. In addition, there is a strong link between habitat loss and the bushmeat trade. The previously inaccessible forests are opened by logging companies for commercial hunters. The logging companies not only give them access to areas where gorillas live. They also offer the hunters their vehicles to transport to distant bushmeat markets.

But there is a greater direct impact on the habitat of the gorillas. That is the cutting or burning of forests by local people. Why do they do this? For expansion of settlements, the construction of fields and expansion of pasture for livestock. The trees are used for firewood, charcoal and building materials.

Every cell phone contains the metal tantalum. Tantalum is used as a powder during the production of small electrolytic capacitors. These capacitors are used in cell phones, game computers, PC’s, laptops and other electronical devices. Tantalum is made out of coltan, a valuable ore.

The habitats of the Grauer’s gorilla (eastern lowland gorilla) and the mountain gorilla are located in a region which has suffered from several armed conflicts. In addition, 80% of coltan reserves in the world can be found in exactly the same region in the Democratic Republic of Congo. Coltan is of enormous value. The economy in this area revolves around the trade in this ore. Armed militias exploit many of the coltan mines. The profit earned by the export of coltan is used to finance the armed rebels in this area. This leads to more violence and destruction of gorilla habitat. To give you an idea, there are 10,000 illegal miners working in the Kahuzi Biega National Park. The animals in this forest are hunted to supply them with food. 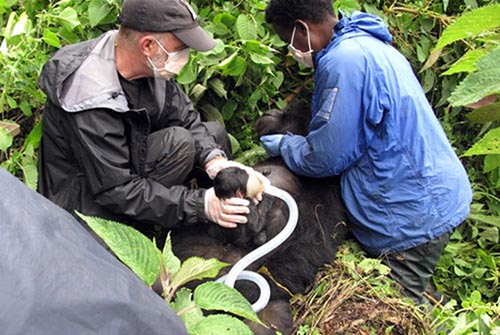 People who come into contact with gorillas can transmit diseases to them. This risk is especially high with poachers, park rangers, loggers and miners. There are also places where people, with domesticated animals such as cattle, live relatively close to gorillas. This can also be of risk as pathogens and parasites can spread to the gorillas. The most vulnerable are the gorilla groups that are used to contact with people. For example through research and tourism, they are especially at risk when the safety rules are not obeyed.

Epidemic diseases such as Ebola and anthrax pose a major threat to the populations of the western lowland gorilla. Especially the Ebola virus, which is transferred by bats on the gorillas, is very deadly. This virus causes internal bleeding that can be fatal. In the 1990’s and in 2002-2004 there were several Ebola outbreaks in Northeast Gabon and Republic of Congo. In 2004, 90-95% of western lowland gorillas in two research areas in the Republic of Congo died. Outside these areas in Gabon and Congo it is estimated that hundreds, if not thousands of gorillas died. Conservationists unfortunately do not yet know how to combat this deadly disease. A disease which does not stop at the boundaries of national parks.

Fortunately there are various solutions for the threats to gorillas:

Public awareness campaigns are an additional solution. Aimed at the local and national population, these campaigns address the problems, its effects and the solutions. Destruction or modification of habitat The establishment, maintenance and protection of national parks and forest reserves. Fragmentation of the gorilla population To ensure that gorilla populations don’t become isolated, corridors can be built through reforestation. A corridor is a natural “connection” between the gorilla habitats. WCS Nigeria pursues this goal together with Pandrillus and NCF. Learn more about this project. Conflicts between gorillas and people Starting projects to protect gorillas, together with the local population (community-centered conservation). GRACE (Gorilla Rehabilitation and Conservation Education Center) is one of the projects we support, which collaborates with the local people to preserve the Grauer’s gorillas in the area. Learn more about GRACE and how you can help. Disease transmission/epidemic diseases Applying the successful “One Health” method. One Health is the philosophy of the Gorilla Doctors. They belief that the health of one species is inextricably linked to that of its entire ecosystem, including humans and other animal species. Click here to learn more about the Gorilla Doctors and how you can support them! War and political instability The suffering of humans and animals is enormous because of wars and conflicts. The solution calls for international diplomacy.