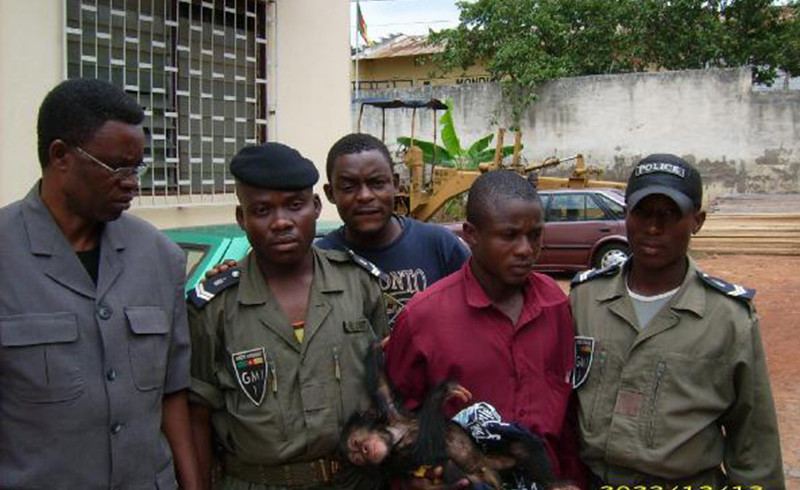 In the past a hunter went into the forest to catch one or two animals at the most. Now cars are driving in this same forest using roads made for commercial logging. The more permits are issued for timber companies; the more roads are built in the forest. Hunters now have free reign. Many African employees of logging companies earn a decent extra penny from hunting for bushmeat. A hunter can get forty dollar for a smoked gorilla, which for many Africans is more than a month’s salary. And the twenty dollars for a chimpanzee is also extremely welcome. The hunting also leads to the capture of orphaned gorillas and chimpanzees. Many of these orphans are sold for big money and end up in the Middle East or Asia through the illegal pet trade.

The threat to the African apes and other wildlife has increased dramatically in recent years. This is certainly true for most elephants and rhinos. This is due to large-scale poaching, organized networks and illegal trade. Although national laws and international conventions protect endangered species on paper, enforcement of these laws is very weak. The main reason for the lack of enforcement and implementation of wildlife laws in Africa is widespread corruption. Judges are bribed and poachers and middlemen are redeemed while they are in custody. Of course, that’s not the way it should be! There has to be a clear risk of increased penalties or imprisonment for carrying out this illegal trade. Otherwise the illegal wildlife will keep on thriving.

As a result, illegal trade and the associated large-scale massacres are sadly common practice. Today the illegal wildlife trade is ranked the fifth most lucrative transnational crime after drugs, human trafficking, oil smuggling and counterfeiting of money. It is estimated to be worth between 7-10 billion dollars each year! The great apes remain threatened by illegal trade, but for elephants and rhinos it’s almost too late. A recent study showed that about 100,000 elephants were slain for their tusks between 2010 and 2012 throughout Africa.

Wildlife traffickers are part of well-organized international criminal organizations. They often participate in other illegal activities such as drugs and arms, and sometimes have links to terrorist networks. While the international media focuses on poachers, these smugglers often remain out of sight and they continue virtually unpunished.

If we want to prevent the great apes from going extinct, then we urgently have to improve the enforcement of the laws in Africa. The Dutch Gorilla Foundation therefore supports the unique method of Last Great Ape Organisation (LAGA). LAGA succeeds as one of few organizations, to get the wildlife traders prosecuted and behind bars and tackle high-level corruption.

LAGA is the first Wildlife Law Enforcement nonprofit organization in Africa. It was founded in 2002 to fight the illegal trade in ivory, chimpanzees and gorillas in Cameroon. LAGA has a unique approach with a focus on research, field operations (leading to arrests), legal aid and the use of media. The organization has since expanded into a regional network of satellite programs in Guinea, Senegal, Togo, Benin, Congo, Gabon, Central African Republic and Uganda. From 2006, every week a major illegal wildlife dealer has been arrested, around 87% of these are behind bars from the moment of arrest with no bail granted.

Would you like to join our fight against the illegal trade in gorillas and other wildlife? Support LAGA! A unique organization that ensures that the wildlife laws are enforced in Central Africa.

Are you convinced and do you want to support LAGA? Click here!