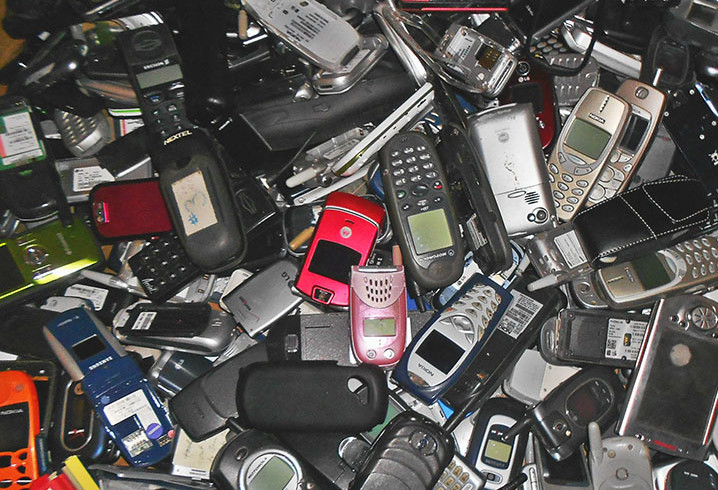 Support us and recycle your old cell phone! By recycling your cell phone you’re helping to save the habitat of chimpanzees and gorillas. How? Let us explain.

Every cell phone contains the metal tantalum. Tantalum is used as a powder during the production of small electrolytic capacitors. These capacitors are used in cell phones, game computers, PC’s, laptops and other electronical devices. Tantalum is made out of coltan, an ore.

80% of the coltan reserves in the world can be found in the east of the Democratic Republic Congo. Coltan is of high value. The economy in this area revolves around the trade in this ore. Armed militias exploit many of the coltan mines. The profit earned by the export of coltan is used to finance the armed rebels in this area. This leads to more violence and destruction of the environment.

Additionally, the mining for coltan causes an ecological disaster. Large sections of African rainforest are logged to make room for, often illegal, mining. Forests that are home to Grauer gorillas and other wildlife. This causes Grauer gorillas to lose their habitat. On top of this the miners hunt for the gorillas as bush meat, to feed them after a hard days work. Since the production of cell phones, the number of Grauer gorillas has declined by 80%. Yes… 80%!

By buying new cell phones we create a demand for coltan which keeps the high value intact. Today coltan is worth € 110 per kilo. A first step to act against this problem is to decrease our consumption and to recycle. Each cell phone that is collected is a step towards less violence in Congo. And more importantly for the gorillas; you’re helping the great apes and their habitat in this region.

The Dutch Gorilla Foundation doesn’t collect cell phones herself. But don’t let this stop you to recycle your cell phone! There are three Dutch zoos which collect cell phones and the earnings go to several gorilla projects. We advise to contribute to one of the following:

GaiaZoo
Via the Gaia Nature Fund the proceeds go to the protection of grauer gorillas in Mount Tshiaberimu, a special area in the Virunga National Park, Democratic Republic of Congo.

Ouwehands Dierenpark
Via the Ouwehands Zoo Foundation the proceeds go to the Aspinall Foundation for the reintroduction of gorillas in Congo and Gabon.

Apenheul/Diergaarde Blijdorp
Via the Apenheul Natuurbehoudfonds (ANF) the proceeds of collected cell phones in these zoos will go to the protection of apes and their habitat throughout the world. The gorilla project that is supported through the ANF is the Mbeli Bai research and education project in the Congo Republic.

AquaZoo Friesland, Dierenrijk, Safaripark Beekse Bergen and ZooParc Overloon
In these Zoos, Stichting Wildlife has placed special bins for your old cellphones. The proceeds are for projects supported by Stichting Wildlife, including the projects of the Dutch Gorilla Foundation!

Previous Project
Business partnerships
Next Project
Wishlist for our projects